“W.During the social distancing we built a social hall, ”says Richard DeShantz, who locks up the inside of his newest business, Coop De Ville.

More than two years in the making, DeShantz is slowly rolling out the opening of its Strip District house, which combines a fast, casual Mediterranean restaurant, barcade, coffee shop, several bars and an all-day lounge into one 14,000 square foot entertainment venue.

There is a coffee bar up front, a refreshing carryover from the time Marty’s Market occupied the room. There is also a large square bar with comfortable high seating and huge television screens. The rest of the interior is divided into zones. There is an arcade with classic cabinet games, a number of pinball machines, pool tables, and various nooks and crannies that can serve as social spaces, dining areas, or during the day as a place to relax with a book and a cup of coffee. At the other end of Coop there is an 8-lane bowling alley which, together with the main bar, offers a culinary experience with a comprehensive range of services. For the rest of the room, guests place food orders at the back counter and drink orders at one of the two bars mentioned above or at the tiki trailer in the pinball machine. The building’s numerous garage windows stay open as long as the weather permits. As usual with DeShantz, its design is instantaneous, airy, colorful and airy.

“I love the feeling in this area, wherever it goes. It reminds me of Chicago, West Randolph Street. It used to be industrial, but now people and offices are moving in, ”says DeShantz, who owned Cafe Richard in the Strip District in the mid-2000s. 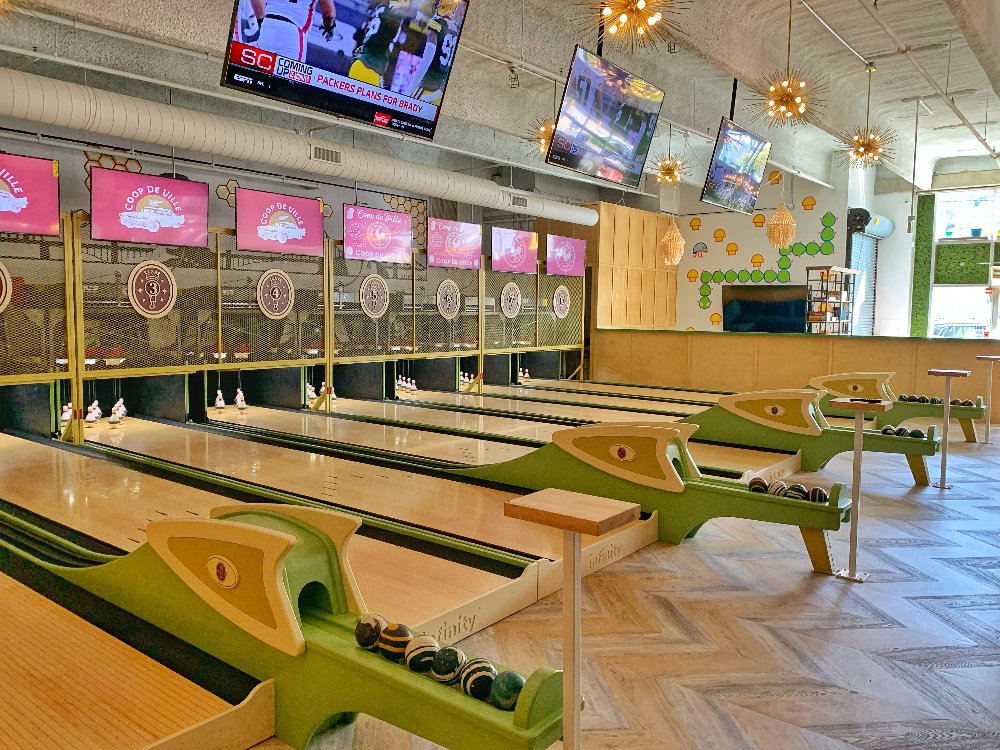 Of course, his full vision for space will not be workable until the physical distancing precautions required to slow the spread of COVID-19 are lifted. The coffee bar is currently open from Wednesday to Sunday from 8 a.m. to 10 p.m. On these days there is outdoor seating for meals and cocktails from 12 noon. DeShantz plans to open Coop for limited indoor seating in two weeks. The arcade is open, but guests cannot bring their drinks to the games as state law requires all guests to continue to sit at a table while they drink.

Chef and partner James Ciminillo’s opening menu is also being recalled, with an emphasis almost entirely on fried chicken. There are six versions of the excellent fried chicken sandwich he’s honed over the past few years, as well as a fried chicken dinner option. Sides like spicy cabbage vegetables, devilish egg potato salad and butter beans complete the offer. Look for a menu that can be expanded to include more sandwiches, cereal and salad bowls, and Mediterranean-style snacks such as devil’s eggs in the coming weeks. Ciminillo will likely add a brunch option in November. “We’ll grow where we need to be with the menu,” says DeShantz. 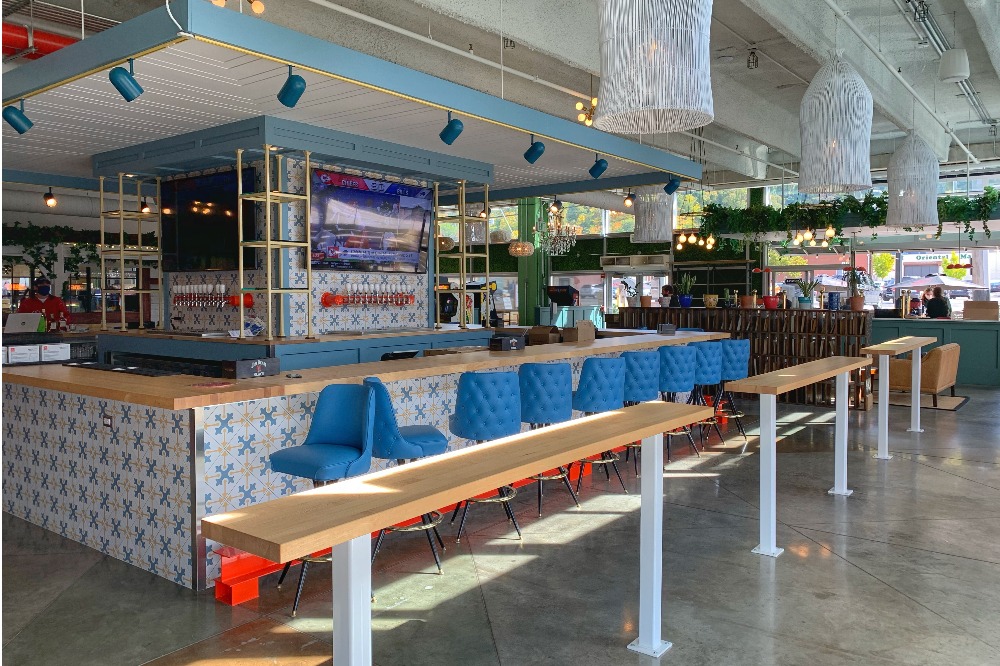 According to DeShantz, his team has developed a beverage program that fits into the room. “I don’t want anything too complex or overbearing with the drinks here,” he says. Southern-inspired cocktails such as Sazeracs, Juleps and Smashes round off the main bar’s cocktail menu. Frozen drinks such as piña coladas and tiki drinks are available in the trailer bar near the pinball machines and the bowling alley. In the evening, the coffee bar is transformed into a wine bar, which also offers coffee-based cocktails.

DeShantz sees its other restaurants as in work during the pandemic. “Let’s rethink everything. Let’s take this as an opportunity to get better. We had a great run, but how can we move forward now? “He says, noting that he has hired a corporate chef, Wyatt Lash, to oversee the culinary process.

Two establishments, Poulet Bleu and Tako, are almost in full swing, albeit with slightly smaller menus (and of course reduced capacity and physically distant seats). I ate outside at Tako a few weeks ago and found the experience extremely enjoyable. The tables outside the restaurant, which spanned halfway up Sixth Street, were transformed into a stylish, energetic space, with food and service to match the mood. Be sure to continue this over the next several months. A number of all-weather igloo-style pods are out and about for cold weather dining. 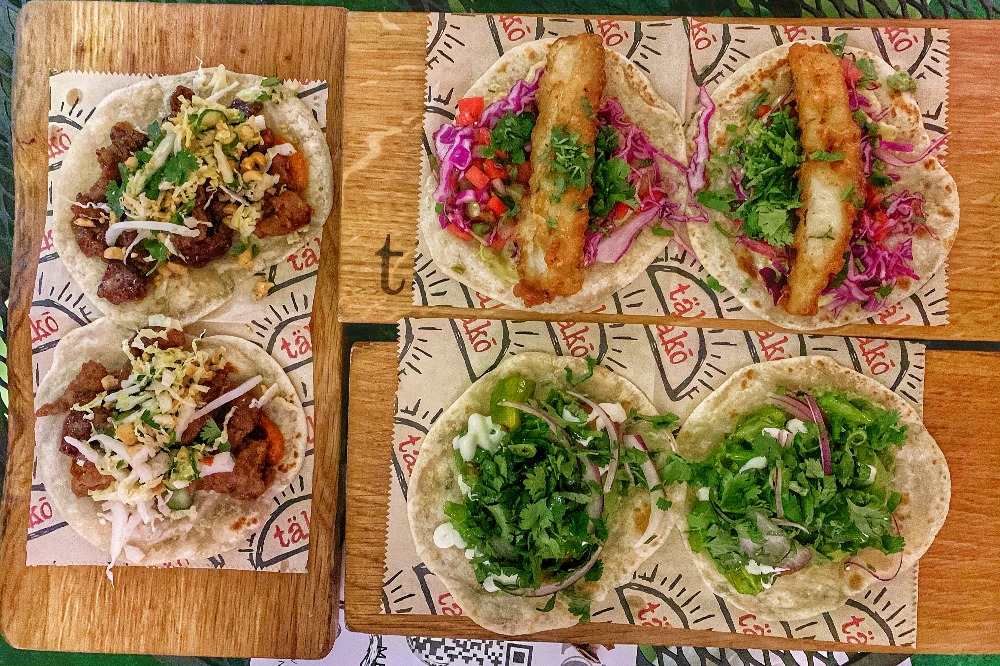 DeShantz and the company are deeply renovating their first downtown restaurant, Meat & Potatoes, which opened in 2011. The restaurant, which is currently open for take-away, will have a menu in the not-too-distant future that includes nifty comfort dishes like linguine and clam sauce, stroganoffs, and expanded steak options, plus a space for prime ribs served with traditional ingredients. Butcher and the Rye is also getting an all-round spruce and is expected to reopen on December 1st. As for the long-awaited Gi-Gin, DeShantz says it may open in early December as well (though we heard that prediction last year).

The expansion of the outpost on Takery Square in Tako is progressing, although no opening date has yet been set for this location, which will be looser than the original from downtown. DeShantz says that fish and poultry are not opening up the way they are for now and that he is starting to think about what to do with the recently closed pork and bean space. Maybe he could open something new as early as next spring.

“At the moment it’s a constant learning matter. I felt a little defeated the second time we had to turn everything off, but now I’m focusing on moving things forward. We’re just trying to roll with the circumstances. We do our best to give people fun, comfort and the opportunity to relax, ”says DeShantz.