Brownfields To Inexperienced Locations: The Historical past Of Pittsburgh’s Riverfront Trails

An “industrial wasteland.” That’s how Pittsburgh’s riverfronts were once described. More than 30 years ago, city officials and developers tried to imagine a greener, healthier future for the land along the Monongahela, Allegheny and Ohio rivers.

In many ways, they’ve succeeded — today, the Three Rivers Heritage trail spans 33 miles, with multiple planned extensions. The trails attract cyclists, runners and families, and are home to thousands of native plants and animals.

But the road to creating a clean, nature getaway from the city’s bustling urban communities was hard.

Good Question! asker Meghan McNabe, a student at the Ellis School and frequent runner on the trails, wondered what it took to make the development happen.

“I’ve always wondered about the history of my favorite trail, which is the riverfront trail that kind of runs along the North Shore and Carnegie Science Center,” McNabe asked.

Courtesy Friends of the Riverfront

The Monongahela riverfront when the steel industry was booming, circa 1910.

A “waste of time”

Former Pittsburgh Mayor Tom Murphy was the first man in his family not to spend his career as a steelworker. He sometimes worked summers at a mill, but unlike his father, uncles and grandfathers, there was no future for him in industry.

Beginning in the 1970s, steel left, threatening to decimate Pittsburgh’s economy. The mills were torn down, leaving empty, contaminated land known as brownfields.

“It was painful,” Murphy said. “We lost half of our population and the people that left were largely young people.”

The region was hurting, and community leaders needed to figure out a way to save Pittsburgh’s economy. Part of that, Murphy said, meant reimagining the leftovers of the steel industry. In the 1980s, Murphy, a state representative at the time, started talking with city officials about building a trail system. 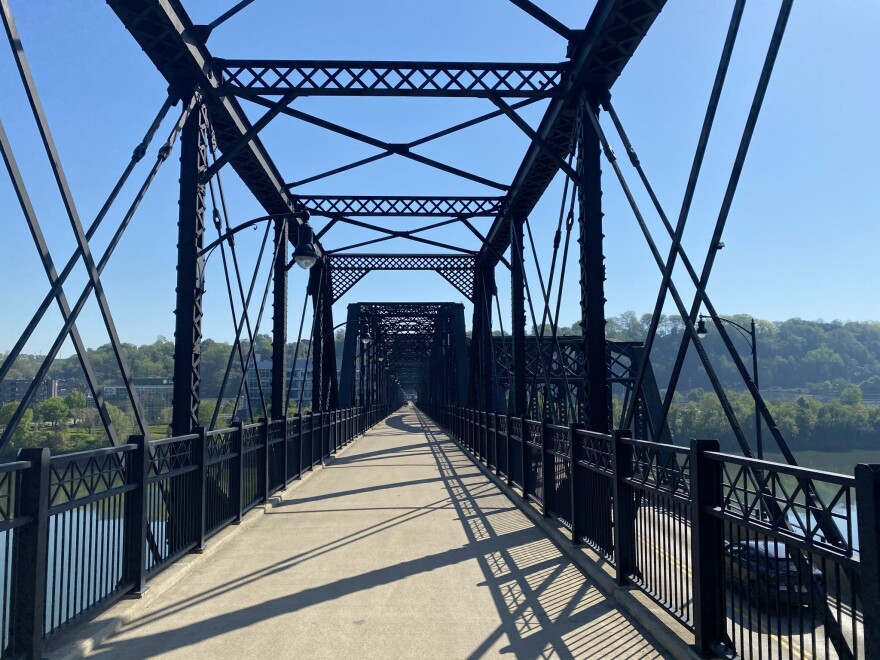 “Some people connected,” he said. “Other people thought it was just a waste of time.”

An avid bicyclist, Murphy convinced members of former Mayor Sophie Masloff’s administration to take a ride along what’s now the Eliza Furnace Trail. Back then it was a vacant railroad right-of-way. He spoke to them about the potential for rails-to-trails, a greenspace renewal movement that began in the 1960s. But it was a tough sell.

“Sophie was rightly worried about the budget and didn’t want to spend extra money,” Murphy said.

In 1990, a group called the Riverfront Planning Committee — which would go on to become Friends of the Riverfront, the current stewards of the trails — secured tens of thousands of dollars in state and federal funding for trail development. They used the money to buy up every piece of available riverfront property and lay a blueprint for bikeable, joggable trails.

Groundbreaking began on the first stretch of South Side’s trail in 1991. 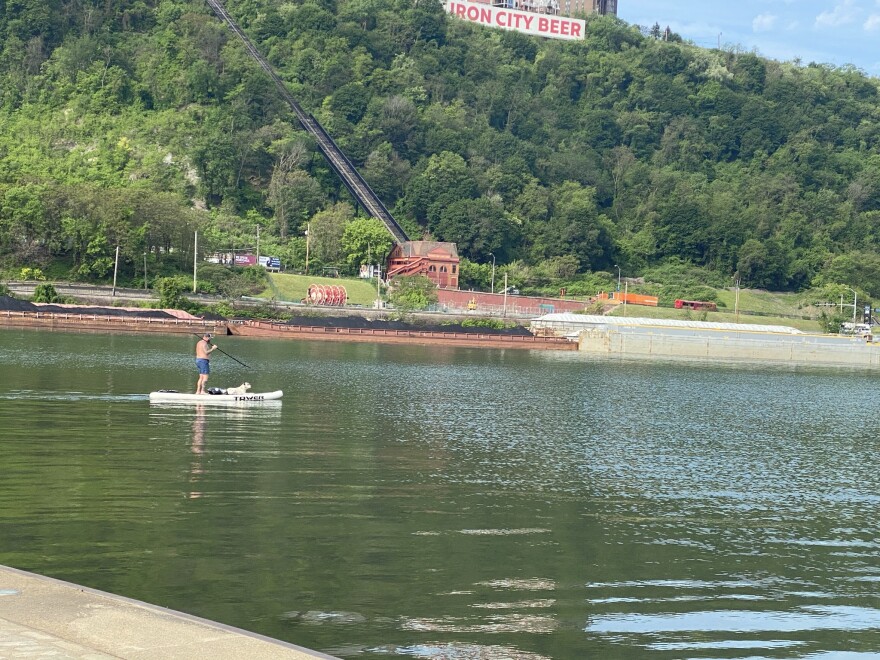 A person navigates the confluence of Pittsburgh’s three rivers.

By the 1990s, Station Square on the South Side had become a tourist destination, mixing its celebration of steel’s past with colorful fountains and new eateries. It benefited from its proximity to the new riverfront trails, and other companies started to notice.

“We began to see a lot of people now wanting to invest on the riverfront,” Murphy said. “They saw the trail as an asset, not a liability.”

Sometimes, however, new construction along the riverfronts was thwarted by the area’s industrial past. Murphy said when UPMC was building a warehouse near Carson Street on the South Side, there was an incident.

“All of the sudden, like a volcano, the floor started to rise in about half a dozen places,” Murphy said. “The concrete was being lifted up.” 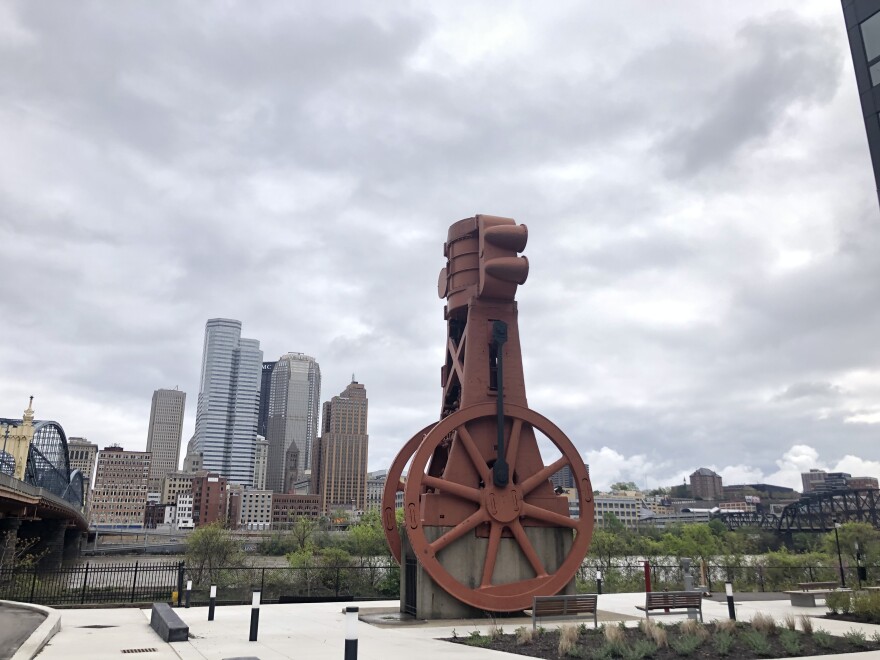 A section of Pittsburgh’s South Side with nods to the former steel industry.

The culprit? Popcorn slag, an industrial byproduct of steel. This particular type, Murphy said, expanded when it got wet. Developers learned lessons as they built new structures and encountered pollution or other waste.

The trail builders and developers also chose to pay homage to the area’s industrial past: Educational signage lines all the three rivers with information about the former mills; old slag pots sit in small parklets; and ingots pay tribute to steel workers.

Allen Dietrich-Ward, a history professor at Shippensburg University, said the steel public art structures help connect people both new to Pittsburgh, and those with ties to its past.

“It provides an avenue by which people of different backgrounds, different experiences, can engage with each other,” Ward said, “The vision of rails to trails that we see with the Three Rivers Heritage Trail in Pittsburgh provides a community-based development model that I think can and should be replicated at communities of a whole host of different sizes throughout Pennsylvania.” 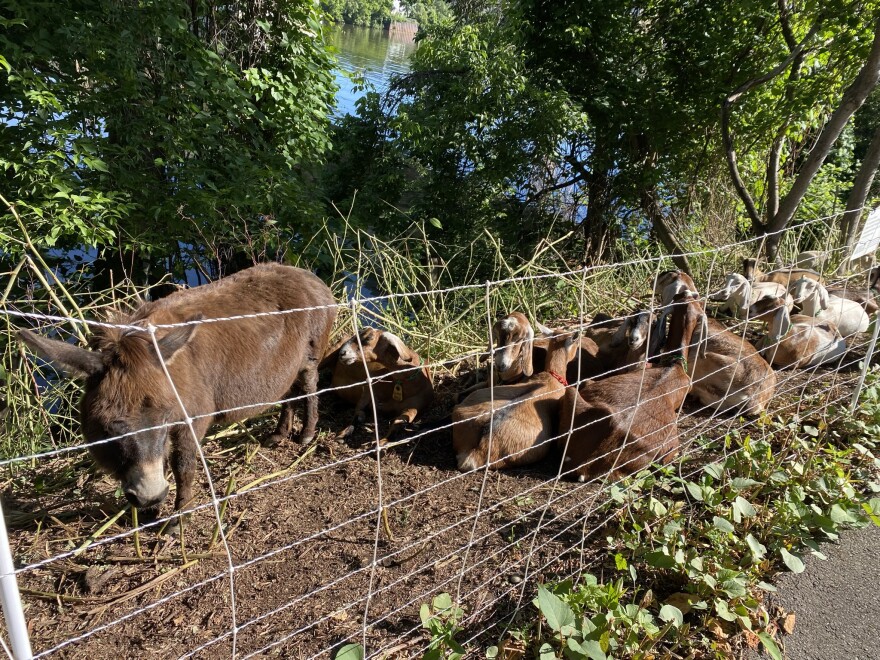 Goats and their herder, a donkey, sometimes hang out on the riverfront trails to eat harmful, invasive plants.

Friends of the Riverfront maintains the trail systems by collaborating with organizations to make sure the pathways are clean, removing invasive plants and designing new extensions. Executive director Kelsey Ripper said they’re currently working to connect the trails in places like the Strip District, Freeport, Pa., and beyond.

“There are 17 municipalities that are all signed on to add a trail extension to the Three Rivers Heritage Trail in their communities,” Ripper said. “That will also be part of the Erie to Pittsburgh trail.”

The riverfront trails already connect to the Great Allegheny Passage, or GAP trail, which runs from Maryland to Pittsburgh. Ripper said they’re also working on trail connections to Cleveland, Ohio, cities in West Virginia, and Harrisburg. Plus, she said, they’ve become a catalyst for more bicycle commuters in the city.

“These trails are used absolutely for transportation. As we think about how the city looks and in the future and how people get around, the trails are going to be a huge part of that and a significant part. And they already are.”

In recent years, the preservation of native plants and removal of harmful species have helped to bring back animals who abandoned the region when the rivers were polluted.

“You see stories about the eagles coming back to Pittsburgh, otters in the rivers and beavers in the rivers,” Ripper said. “It’s because of these types of restoration projects that Friends of the Riverfront has done, as well as many other organizations in the region.”

When the COVID-19 pandemic forced many Pittsburgh residents to their homes, the trails became a respite. Now that more and more people are getting vaccinated, coupled with the warm summer weather, the trails will continue to be a favorite destination.

US shopper costs have seen their largest surge in 13 years; Inflation is more likely to have peaked