On Monday, Cafe Carnegie in Oakland introduced a rotating special featuring a signature dish from a well-known Pittsburgh chef. Csilla Thackray, chef at Churchview Farm, is the first cook.

“I’ve gotten to the point in my career where I want to try new things. I love the idea of ​​getting into the guts of another kitchen and seeing how they do things. That’s how I learned all the time,” says Thackray.

The idea is to encourage camaraderie with local chefs while also adding a bit of pizzazz to the daytime restaurant in the lobby of the Carnegie Museum of Art and Natural History, says Doug Genovese, executive chef at Culinaire Pittsburgh, the Dallas-based company that makes it tut directs the culinary operations of the four Carnegie Museums in Pittsburgh.

Thackray’s dish, roasted carrot risotto with dill pistou and homemade ricotta, speaks to the transition between winter and spring, a time when early harvests aren’t quite up yet and there’s often a lingering whiff in the air that eaters might always be drawn to wanting something else little hardy for lunch.

Last Thursday, Thackray chef Jake Kuhn walked through the steps to prepare the risotto, sweat shallots, toast arborio rice and slowly incorporate white wine, followed by a carrot juice and vegetable broth mix. After tossing in grated Pecorino Romano and butter, Thackray finished with a few spoonfuls of oven-roasted carrots, a dollop of creamy homemade ricotta, and a dollop of green dill pistou, prepared with garlic and pistachios.

“I had to come up with something that would work for the menu, that represented what I do, but also something that the chefs here could replicate,” says Thackray. 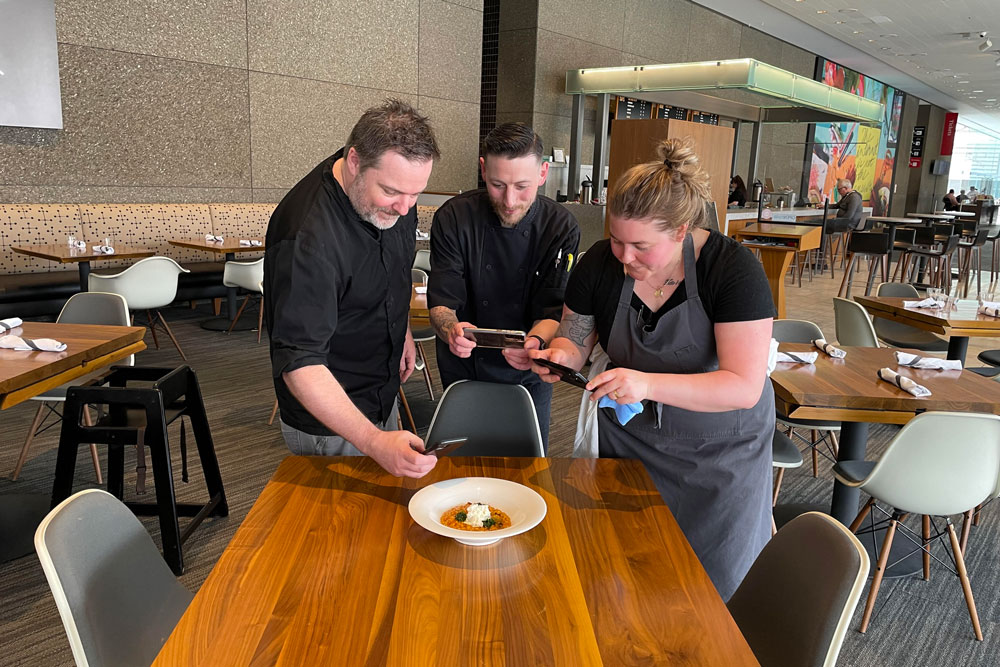 Genovese says Thackray was an easy first choice — he’d met her over the years when she was chef on The Vandal in Lawrenceville and had attended several dinners at Baldwin Borough Farm last season, Thackray’s first as chef on Churchview.

“Her style of cooking also suits the restaurant,” he says, citing Thackray’s emphasis on pre-cooking vegetables and her commitment to reducing food waste.

As for the rest of Cafe Carnegie’s menu, it remains guided by the ethos introduced when the restaurant opened in late 2016 – serving accessible and flavorful vegetable and whole grain dishes that make you feel better when you eat them eat (original consulting chef Sonja J Finn, who also owned Dinette, left her position in mid-2020 to pursue opportunities outside of hospitality). Even with the additions of dishes like shredded chicken and a short rib and brisket burger, the eatery remains, at its core, a lovely spot to enjoy a flavorful, lighter lunch, with dishes like butternut squash bisque and poached salmon salad with lentils, green beans, and roasted celery.

Kuhn, who started at the restaurant in 2018, says he’s transitioning into spring by introducing dishes like paresian gnocchi with spring peas, pancetta, manchego and dill and grilled asparagus with burrata, wild garlic pesto and pine nuts.

Thackray’s Risotto will remain on the menu through mid-June. Genovese says he’s in the process of hiring the next chefs. “We love to see seasonal techniques and different uses of produce,” he says.

In brief: Ole 5K, Sealark’s ladies’s group and extra within the North Hills