Daniel Libeskind, a New York City architect who descended to the depths of Ground Zero after Sept. 11, 2001, visited Pittsburgh’s Ground Zero on Thursday and Friday.

The son of Holocaust survivors, Mr. Libeskind will preserve and redesign parts of the Tree of Life / Or L’Simcha synagogue, the site of America’s worst antisemitic attack.

As he visited the synagogue’s complex, he listened for “inaudible voices. It’s not something easy to absorb. There is a human sound that cries out to you,” the architect said during an interview Friday in Squirrel Hill. The synagogue occupies about an acre-and-a-half of land at Shady and Wilkins avenues. 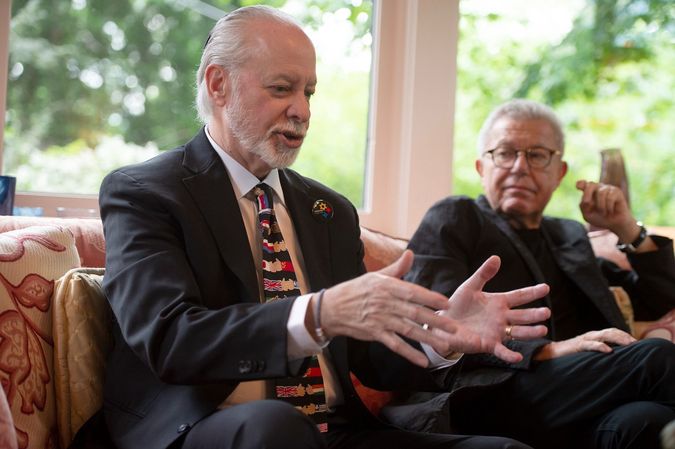 Rabbi Jeffrey Myers of Tree of Life with Daniel Libeskind during an interview in the Squirrel Hill neighborhood of Pittsburgh.

Mr. Libeskind’s task is both to honor the memory of those who died and to create space for an active congregation of 200 households plus the Holocaust Center of Pittsburgh, which is in Greenfield now but plans to move to the synagogue.

“It’s a public service to create a civic building, a building that is welcoming to everyone. Everyone was affected here — people saw it on television,” Mr. Libeskind said.

Flowering green and white trees on the synagogue’s grounds scent the spring air. A long, tall fence, festooned with artwork, is a reminder that the silent building is where 11 worshippers died on a Shabbat morning Oct. 27, 2018.

The gunman killed congregants from Tree of Life and two other congregations — New Light and Dor Hadash.

Two additional worshippers and four police officers were injured in the attack. The gunman is awaiting trial on federal charges, including violations of hate crime laws. He could face the death penalty if convicted.

When people finally return to the synagogue, Mr. Libeskind said, he wants them to feel that “life is being affirmed in this place.”

There, 14 stained glass windows from Tree of Life’s main sanctuary are being taken apart, cleaned and restored. The main sanctuary was not in use on the day of the attack.

During the late 1960s, Nicholas Parrendo, an artist at the stained glass studio, created the windows in close consultation with Rabbi Herman Hailperin, who was Tree of Life’s rabbi for 40 years.

At the studio, arrayed on long tables, are the original scale drawings of the colorful windows Parrendo made.

Called cartoons, they are blueprints that show the windows and frames and will aid studio artists in restoring the 14 artworks, each of which is 6 feet wide and 22 feet tall.

The windows consist of 1-inch-thick pieces of French “Dalles” glass; the edges of each piece are faceted to catch sparkling sunlight. The technique involves using thick slabs of square or rectangular colored glass that are either broken with a hammer or cut with a saw. The use of thicker glass pieces creates more dramatic colors than in traditional stained glass windows.

Parrendo also created an English font that was inspired by Hebrew lettering and hand painted the memorial text at the bottom of each window. He died in 2016.

His son, David Parrendo, manages the stained glass studio and his sister, Celeste, is an artist in the business. 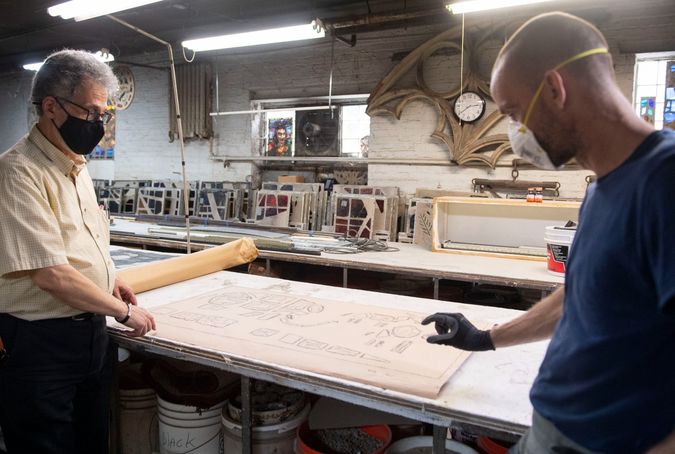 David Parrendo recalled that Rabbi Hailperin invited his Roman Catholic parents and three siblings to attend a Jewish wedding at Tree of Life on April 11, 1965, a date his late father noted in the project file.

It was the first time the Parrendos had witnessed a Jewish wedding, and David Parrendo recalled being moved by the richness of the ceremony’s symbolism.

The task of restoring the windows his father designed and made began this year.

On a cold Monday morning in January, Bryan Nightingale, a master craftsman at Hunt Studios, stood on a lift and began the delicate, difficult task of removing the 14 windows.

“I was glad I wasn’t on the lift,” said Michael Eisenberg, a past president of Tree of Life. He joined the stained glass studio tour Thursday with his wife, Laurie Z. Eisenberg, a Carnegie Mellon University professor who wrote the guide to the windows for congregants.

The first seven windows, on one side of the main sanctuary, show God creating the world. On the other side, seven windows show the Jewish people accepting God’s law.

Removing all of them took two months, Mr. Nightingale said, because they were installed using a sticky substance called butyl mastic.

In their place, the team installed painted wood and plexiglass so that light could still beam into the sanctuary.

After the windows arrived at Hunt Studios, rubbings of each one were made on paper.

Each window must be taken apart and more than 50 years’ worth of Pittsburgh dirt will be removed from the mosaic glass, a process that involves using trisodium phosphate, dishwashing liquid, water and plenty of elbow grease.

By the spring of 2022, Hunt Studios will finish restoring the windows and reinstall them.

There are also stained-glass windows in the smaller chapel where 11 people were killed. They were created by Helen Carew Hickman, who was an artist and stained-glass designer at Hunt Studios and mentor of Nicholas Parrendo.

The Hickman windows depict various branches of Judaism, the importance of philanthropy and key Jewish figures, including the U.S. Supreme Court Justice Louis Brandeis and Henrietta Szold, an educator and founder of Hadassah who died in 1945.

For the past year, Ms. Feige said, Mr. Rothschild has been meeting with survivors and members of all three congregations to discuss how to go forward while remembering those who died.

“He started the process of what happens with the building on his own, as a caring member of the community who had the skills,” Ms. Feige said.

In 1995, Mr. Rothschild designed the synagogue’s Joseph and Violet Soffer Education Center, named for the late real estate developer and his wife. He also has created a new master drawing for the site, Ms. Feige said.

Despite the passage of more than two years, Rabbi Jeffrey Myers, who leads Tree of Life, said reminders of the tragedy are everywhere — on lawn signs, in stores and when more violence occurs, as happened when a transportation worker killed nine people in San Jose, Calif., last week before taking his own life.

“We will always be healing. We will not ever be healed,” Rabbi Myers said.

Tree of Life congregants were displaced twice: first by the killings, then by the pandemic.

“Live streaming is here to stay,” Rabbi Myers said, adding that Tree of Life members will return to in-person services at Congregation Rodef Shalom in Shadyside on June 5.

‘Life is being affirmed in this place’: Daniel Libeskind on his redesign of Pittsburgh’s Tree of Life synagogue

AHA: Bodily exercise must be first-line remedy as BP, LDL are ticking up