Speaking at Scripps College in 2006, LA Times art critic and reviewer Leah Ollman spoke about the intersecting aesthetic qualities of photography and poetry, saying, “Each has a diverse character and, like any medium, defies singular definition . Photography should be a piece of reality, a distortion of reality; a moment petrified, a moment lengthened; a way to freeze time, a way to slow time; a means to devour and honor time, to oppose it and still succumb to it. Is a photo a moment of embalming or a moment of resuscitation? Does the photographic act clarify or make it more difficult? Poetry sends out the same deliciously mixed signals; it refutes the same succinct sum at which it can be so good itself. With this in mind, PQ Poem would like to highlight the upcoming 2021 collection The Camera Artist by local poet Joan E. Bauer, which uses the photographic images of a number of legends of the genre, including Saul Leiter of Squirrel Hill, the poem as reinterpret the visual mechanism.

While Bauer’s poems stand on their own, her ecphrastic piece “Saul Leiter: A Passion for Color” aroused curiosity about this Pittsburgh son who moved to New York and became an artistic pioneer in the emerging world of color photography. It is a pleasure to highlight Bauer’s work and to combine it with some of Leiters photos and paintings generously donated by Michael Parillo, the deputy director of the Saul Leiter Foundation. The photos and paintings add a striking vibrancy so you can easily see how they can inspire. It also feels significant and overdue to give an artistic innovator on the ground a little bit of attention that he’s long deserved.

About the creation of the camera artist

My work on the manuscript that became The Camera Artist began ten years ago. Over the years, the manuscript had various titles, but initially only a handful of poems that touched photography. The manuscript was accepted for publication, but after uncertainty and delay, I withdrew it in frustration, hoping that with more time, effort, and reflection, I could transform it into something better. While I was revising the manuscript, I added a long poem about Robert Frank: “The Camera Artist”. Ultimately, I split this poem into three parts so that its story could unfold throughout the book. I read about Vivian Maier’s street photography and knew immediately that I wanted to include her story. As I added more poems, the focus of the book shifted. A friend read the manuscript and suggested that “The Camera Artist” be the title of the book.

Growing up in the 1950s and 1960s, I was busy looking at photos in LIFE magazine that featured the work of Margaret Bourke-White, W. Eugene Smith, and Dorothea Lange. So it was natural that I wanted to include them in this collection.

My partner Don Staricka is a serious life photographer. We go to photo exhibitions and galleries wherever we are. It was in New York that I saw Vivian Maier’s photographs for the first time, and in LA I saw a large collection of Cindy Sherman’s work.

Years ago I had seen W. Eugene Smith’s monumental collection of Pittsburgh photographs at the Carnegie Museum of Art, but the only feeling I could write about was after seeing his photo essay on mercury poisoning in Minamata, Japan.

On the way, I had to think about how much poetry and photography have in common: storytelling, the impressive image, decisions about focus and scope, light and shadow, sound, framing devices, texture and repetition.

Over time, I realized that there were cameras hidden in my poems, even poems about childhood, John Berryman, Frida Kahlo, and the space program. By then, I knew I couldn’t let go of the book without considering the work of Diane Arbus, Roy DeCarava, Berenice Abbott, and Toyo Miyatake.

One of the last poems I added was about Saul Leiter. My partner Don bought a small gray volume of Leiter’s photographs from the Getty Museum. It was in our living room for a while before I took it in and thought about these unconventional and transcendent photographs.

Leiter grew up in Pittsburgh as the son of a Talmud scholar. I really appreciate both his immense talent and his humility. And I like what he said about his muse Soames Bantry: “We stumbled through life together.” 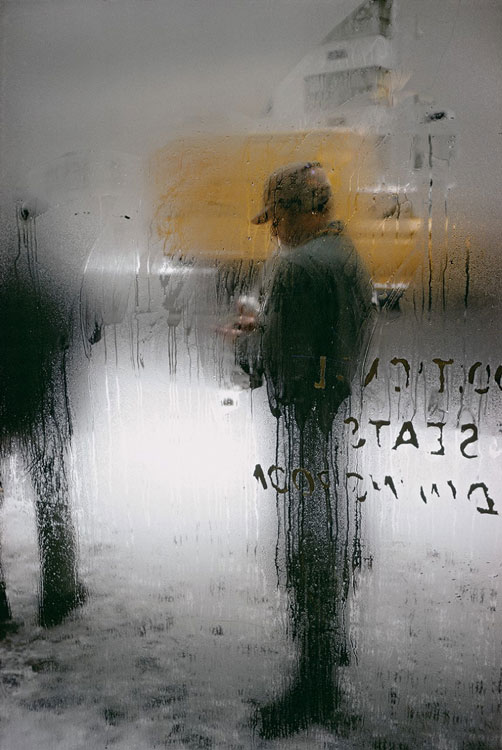 Saul Leiter: A passion for color

‘Red Umbrella’ (1955) Through a rain-splashed car window,
a dark and huddled figure

Words stenciled on the glass, illegible.
The worker’s legs, a dreamlike blur.

The father, a well-known Talmudic scholar,
wants his son to be a rabbi.

The son studies for a year and then flees
to New York City – to escape his father
Become a painter.

The mother thinks he could still be a rabbi.
but paint on the third floor.

His mother gave him a detrola when he was 13.
He exchanges prints by W. Eugene Smith for a Leica.

Smith tells him that he can probably make a living.
with photography.

In the fifties he pioneered the color,
with Kodachrome.

In his East Village apartment
a maze of knickknacks, books, pallets, brushes, boxes.

His pictures and those of Soames Bantry
on the cracked and peeling walls.

In interviews, conductor’s voice is slow and hesitant
with a self-deprecating laugh.

My goal was to pay the light bill.

In his photographs of Soames Bantry,
She is naked and sluggishly reaches out of bed

for a cigarette on a crowded table
or standing & laughing,
half wrapped in a shirt.

We stumbled through life together.

Leiter seems amused by how his life turned out.
His work was “discovered” at the age of 82. He says:

I could have had a career but went home instead
& drank coffee, looked out the window….

I don’t have a philosophy. I have a camera. 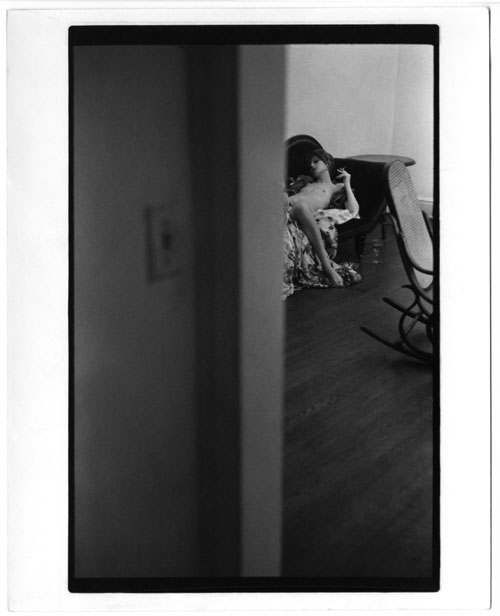 “The Beauty of Simple Things”

Of the three sons of prominent Pittsburgh rabbi Wolf Leiter, the second son, Saul, who was born on December 3rd, was the most intelligent and charismatic with the greatest natural ability to recite passages from the Talmud. 1923. Saul Leiter had plans of his own, however, and in 1946 he shook off the onerous expectations of his family and moved to New York City, where his burgeoning love of painting and photography would quickly blossom and where he would reside for the rest of his long life.

It was in Pittsburgh, however, that Leiter discovered the flaw. He started painting as a teenager and owned an inexpensive, easy-to-use Detrola camera that his mother gave him as a gift in the late 1930s. His first photographic muse was his younger sister, Deborah, who playfully starred in pictures taken on the porch of the leaders’ Squirrel Hill house and in places like Schenley Park.

Many of the same words could be used to describe Leiter’s uniquely poetic photographs. Conducting most of his work in and around his downtown New York home, Leiter found beauty and mystery in the most ordinary of settings, making use of the everyday subjects like umbrellas, snow, and condensed glass. “I happen to believe in the beauty of simple things,” said the artist in a 2006 WUWM radio interview with “Lake Effect”. “I believe that the least interesting can be very interesting.”

In the late 1950s, Leiter entered the world of fashion photography in search of a way to make a living with his camera and soon appeared regularly in magazines such as Harper’s Bazaar and Nova. He traveled extensively on commercial shoots and enjoyed a successful career through the 1960s. When art directors began to meddle in his work, he turned his back on his fashion career. Leiter wouldn’t be in the spotlight again until 2006 when his first book, Early Color, was published, which revealed his miraculous street photography of a world that was finally ready. (The content, mostly from the 1950s, was recorded at a time when color was not readily accepted as a serious art.) This book was followed by Early Black and White (2014) and the nudes collection In My Room (2018). including solo exhibitions around the world.

Although best known as a photographer, Leiter was also an active painter until his death in 2013, a few days before his ninetieth birthday. His paintings share with his photographs a dramatic sense of composition that often includes large blocks of a single color, with most of the “action” confined to smaller areas.

In a 2013 interview with Vince Aletti at the New York School of Visual Arts, Leiter said, “I think the reason I developed something myself: I didn’t know any better. I did what I wanted to do. “ 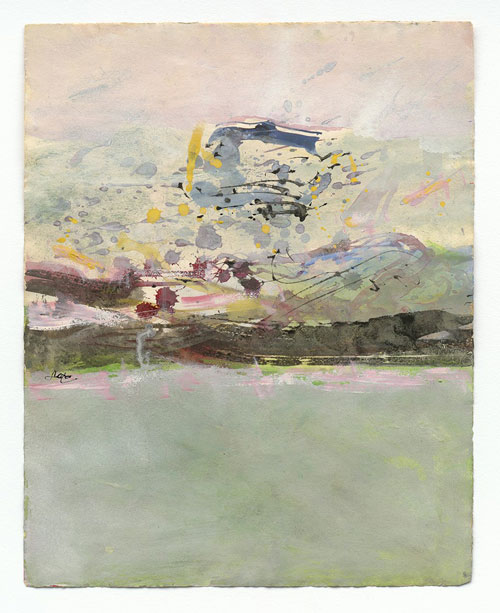