Pittsburgh space entrepreneurs have been charged with rioting within the U.S. Capitol

Two Pittsburgh area business owners were charged in connection with the January 6th Uprising in the US Capitol.

Debra Maimone and Philip Vogel II, both of New Castle, are the youngest Pennsylvanians to be indicted in the U.S. District Court for the District of Columbia.

Their company’s name has been edited on court records, but TribLive.com reports that they own and operate Vera General Contracting at McKees Rocks. Reports indicate that they are engaged to each other.

According to court documents, her social media posts, like many of the defendants, helped the FBI identify her.

Court records indicate the day of the riot. Maimone can be seen in a video posted on her Parler account. She wears a distinctive American flag mask. When the videographer pans inside the US Capitol and comes back to her, she takes off the mask and says, “It’s amazing,” the records say.

The videographer, who was later identified as a bird, asks her to put on her mask and says, “I don’t want them to see you,” the records say.

Debra Maimone is featured in this screenshot from a Parler video in the U.S. Capitol during the Jan. 6 riot, authorities say. (FBI).

Several videos show them in different locations in the Capitol. In one case, they are seen by a group pushing their way through law enforcement to open a door.

In another case, Vogel kicks an office door and they help each other and others in the Capitol by putting on gas masks, as evidenced by court records.

Another video shows them rummaging through a bag labeled “Police” and removing silver wrappers that court records said were hoods to protect against chemical, biological and radiological agents.

As the FBI investigation played out, they found that Vogel had been interviewed by KDKA in October after being rescued from a boating accident, and from that interview they matched his voice with the voice in the Parler video, like it in the records is called.

Vogel is also featured in several photos posted online the day after the uprising showing him wearing the same hat and scarf investigators say he was wearing pictures from the Capitol. The photos showed him with large fish labeled “Got this monster in the Potomac,” according to court records. 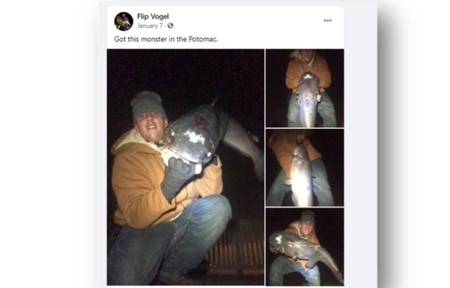 Authorities say Philip Vogel II can be seen in these photos posted on social media the day after the U.S. Capitol riot. According to the investigators, he is wearing the same hat and scarf in these photos as in the pictures of the uprising. (FBI).

In the days following the uprising, both were posted on social media, defending the participants.

In a post, court records said Vogel wrote, “The people arrested are law-abiding, tax-paying citizens,” adding, “These people have turned against tyrants no matter where or who they are.”

According to court records, when a poster about Parler wrote on the Maimone-linked account, “So you have illegally occupied a government building,” Maimone replied. “I’m not saying you’re a stupid sofa potato. I say I was full of tyrants in the government building and saw a lot of patriots tired of being shot at lightning and gassed for trying to protest peacefully. And they took the capital, which is the homeland of the people, and paid for it by the people. “

When the other Parler user wrote that the FBI is investigating and that anyone who has entered illegally will be sentenced to prison terms, Maimone replied, “It’s good I wasn’t there,” and reiterated her support for the participants, according to the Records.

Both are charged with theft of property, knowingly entering a restricted building, and forced entry and disorderly behavior, court records show.

More than 300 people were charged in connection with the riot.

“Birds of Better Cleveland” and “The Widespread Angler”