Long ago in Pittsburgh, not eating meat in the restaurant meant a sad little salad (maybe covered in fries) or maybe a meatless pasta dish. However, times have changed significantly – and our city’s reputation as a classic meat and potato town is likely to end forever. (Although we have a restaurant called, well … Meat & Potatoes).

It was happening slowly. The rise of ethnic cuisines in Pittsburgh (Indian, Thai, Vietnamese) that are less dependent on meat was part of it. But in 2016-17 all of a sudden the absolute best new restaurants of all kinds in Pittsburgh went completely vegan (Apteka, B52, Onion Maiden), and it went beyond a trend – it was just the new standard.

There are so many skilled cooks in town mostly meatless that now you can get great grain / produce / vegetable food anywhere. (I’m not a vegetarian, but the other 2/3 of my family are so we’ll keep an eye on that.)

The very popular Pittsburgh VegFest is taking place this weekend at Allegheny Commons East, the park on the North Side across from Allegheny General Hospital. So we thought it was time to update this story, which we last published in 2019 (quite a bit has changed since then).

Here are some of our favorite sources for vegetarian / vegan food in Pittsburgh:

Apteka, Garfield
Vegan food from Central / Eastern Europe seems almost impossible as the region is more of a heavy, meaty cuisine. But Kate Lasky and Tomasz Skowronski don’t just make it. They do it so well that you don’t even notice the meat is missing. The two started throwing a pop-up pierogi night – and their light, soft sauerkraut or smoked cabbage potato pirogies can rival anything Grandma does. There are plenty of pickles on the menu where Apteka really shines. If you can’t pronounce Koptya (potato dumplings) or Faszerowane Pomidory (fried oxheart tomato stuffed with long rice, zucchini, beets, cabbage), don’t worry. Just ask. Or try the Horse & Pepper with buckwheat vegetable pie, horseradish coleslaw and marinated peppers on a grainy homemade bread sprinkled with seeds.

The zenith, south side
There was a time when Zenith was the only vegan game in town – and the lines for their famous brunch were down the block on the South Side. The appeal is multi-faceted – Zenith is replete with art and antiques – and it’s also home to a chic little cafe that’s deliciously decorated with mismatched vintage furniture and dishes. The menu changes weekly and features dishes such as Vegan Linguine & Artichoke in White Bean Sauce and Vegan Almond French Toast. But the dessert table is probably the main attraction. These vegan desserts are definitely not a pale imitation of their buttery cousins, so give yourself a treat. And along with the food, everything in the room – from the lamps to the unsuitable dishes – can be bought. 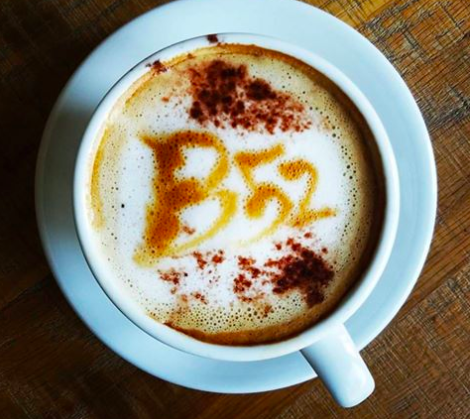 Great coffee preparations await you on the B52.

B52, Lawrenceville
Here you will find mainly Mediterranean cuisine, with a special focus on excellent baked goods from owner Omar Abuhejleh, who also owns the Allegro Hearth Bakery in Squirrel Hill. Some dishes are initially meatless, such as falafel and spinach pie. Others are successfully reinvented without meat, such as the Seitan Shwarma and the Spicy Kofta Tofu Wrap. Make sure you order sauces – the zhoug is strong, like a spicy coriander pesto, and the harissa is subtly spicy, with toasted red pepper, chipotle, and cayenne pepper. B52 is in a bright, modern, minimalist room that fills up quickly. It also has a full espresso bar and makes its own chocolates and cashew cheese.

Onion Maiden, Allentown
There is a certain consistency in so many new restaurants, with a familiar blend of locally sourced ingredients and dangling Edison onions that don’t surprise anyone. Onion Maiden, which started out as a vegan catering project for punk and metal shows, is something different. Nobody confuses this with a vegan hippie hangout. They have as eclectic an approach to the menu as they do to their heavy metal decor and soundtrack (which ranges from hardcore punk to thrash to Judas Priest). There’s the Kale ‘Em All-Salat and Balls to the Wall (tofu croquettes, served with black “forbidden rice”, sautéed kale, bean sprouts, red cabbage) and the Terrormisu (yes, you guessed it – vegan tiramisu). Currently they only make takeout. 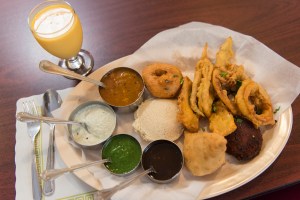 Always lots of sauces – some spicy, some not – at Udipi. Photo by Erika Gidley

Udipi Cafe, Monroeville
This super-unpretentious place – slightly upgraded from its beginnings with styrofoam and plastic cutlery – is the real deal for flavorful vegetarian and vegan South Indian cuisine. In fact, it’s one of the best Indian restaurants you’ll find anywhere, although it sure doesn’t look like much. The paneer makhani, with homemade paneer cheese in a spicy tomato-onion-cream sauce, is terrific. And don’t skip the huge, pancake-style dosas served with hot chutney.

Pittsburgh’s only food co-op has everything from produce to cereal, but in the back the East End Food Co-op has a great little juice / smoothie bar and cafe that vegetarian eaters will love. Among other things, you will find vegan baked goods and a Sunday brunch with tofu scrambled eggs and vegan pancakes. There is also a take-away deli, soup take-away, full bakery and salad bar.