Refreshed and Revived, The Vandal in Lawrenceville Reopens

Joey Hilty and Emily Slagel have continuously made minor and, occasionally, major tweaks to The Vandal throughout their restaurant’s seven-year history. However, their current design refresh and menu refinement are the most significant in the Lawrenceville establishment’s run.

While many establishments in Pittsburgh have opened as or pivoted to a fast-casual or comfort-food focus in response to the coronavirus pandemic (or, in a few cases such as Spork, more formal), The Vandal went in a different direction. As a result, it has the potential to be a model for the evolution of the ingredient-driven, small-menu restaurants that thrived prior to the pandemic.

“Over the past few years, we’d become much more inspired by being a neighborhood wine bar and cafe than the little sandwich shop we were when we opened. We kept making these shifts in our menu but the experience wasn’t translating into how we were speaking in terms of food, service or wine,” Hilty says.

The Vandal added a liquor license prior to the coronavirus pandemic, but it never quite changed the dynamic of the formerly BYOB restaurant.

“We had an abandoned coffee bar that we used for wine but that didn’t really send the message we were taking ourselves more seriously as a restaurant and wine bar,” he says.

So after chugging along (often quite delightfully) for the past two years, Hilty and Slagel decided, with consultation from mossArchitects, to significantly redesign the minimalist space and closed for 12 weeks to do it.

Gone are the coffee bar and the awkward window bench seating. In are a beautiful five-seat marble bar framing the open kitchen, a long banquette and custom-white oak tables built and designed by Bones and All. Top that with soft lighting, whimsical cartoon artwork and easygoing music, and it all makes for an enchanting dining experience. 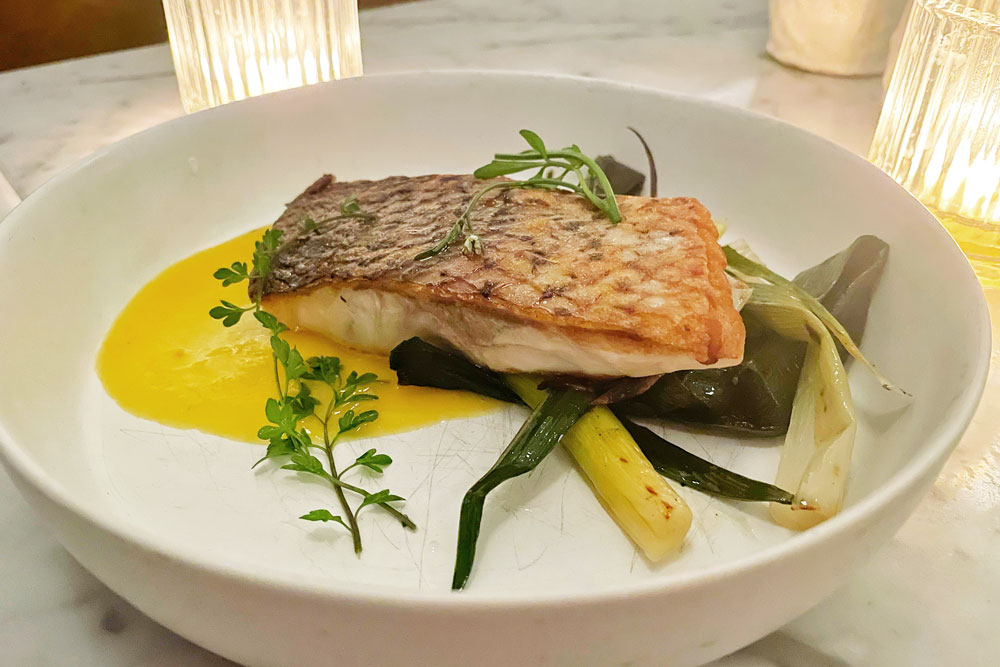 “I like to call it European casual. I don’t know how pretentious that sounds but it’s really not meant to be. It’s more like casual dining can be a little more than serving sandwiches and flatbreads. The sense of escape when dining out is a special thing and that’s really our goal even in a less formal atmosphere,” Hilty says.

Aaron Basskin, who worked at Apteka and Reed & Co. prior to joining The Vandal in October, leads the kitchen; he and the rest of the small kitchen crew are working collaboratively on the build and execution of the menu. Hilty, who has run the kitchen on and off since the restaurant opened, says he’s serving as sort of editor-in-chief for everybody’s ideas.

It’s still a work in progress, but I saw a lot of promise when I visited earlier this month. Some dishes didn’t quite land — casarecce, a twisty Sicilian pasta, wasn’t the right shape for a noodle heavy on gluten-free chestnut flour and a red snapper crudo lacked cohesion — but most of what was offered was delightful.

Tart and tangy punctuations are an emerging food trend, and The Vandal’s black bass with kumquat, grilled leeks and miso brought those flavors to the forefront. The meaty fish was enchanted with a balanced set of peppy, sour and tart kumquats and sulfurous leeks. The accompanying sauce, bolstered by miso, added tangy, funky sunshine.

Another main course, ribeye with potato mousse, black garlic bordelaise and watercress, presented as a cartoon, with little mountains of fluffy, foamy potato between streams of black garlic mingling with the steak’s juices with a scattering of verdant green watercress. 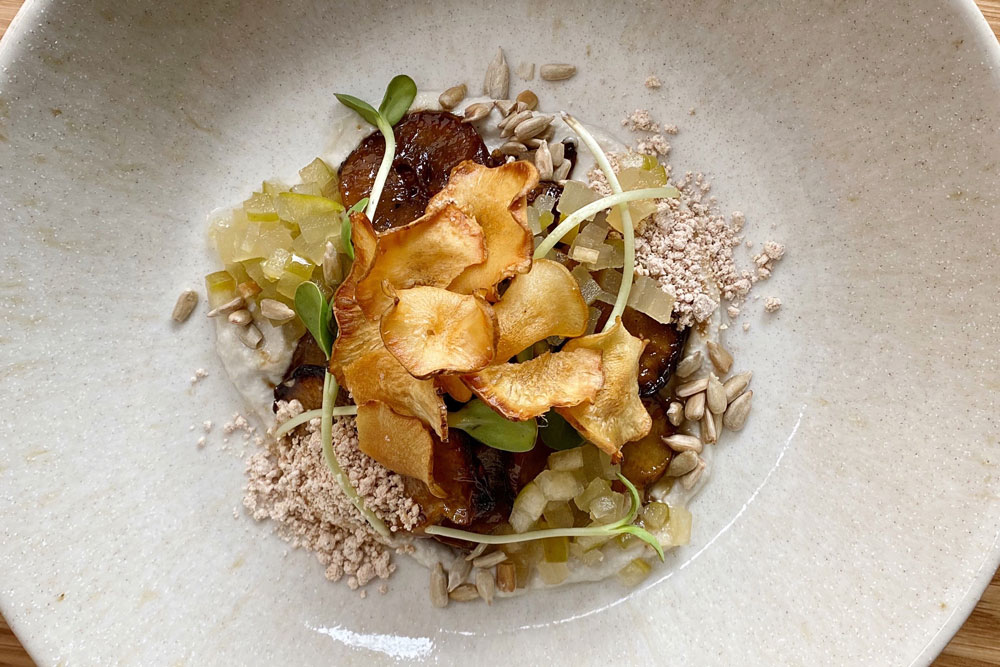 Two fantastic bites at the start and end of the meal framed those larger plates. Sunchokes with sunflower, coffee and green apple was a colorful pop of storage crops building a final bridge to the growing season. When I mixed all the components together, I found a textured balance of savory, earthy and peppy. An olive oil cake with satsuma, vanilla and rosemary made for a yummy dessert highlighted with little bits of crunch, another firm, tart citrus pop and spicy, herbaceous notes from rosemary.

The bar program has just the right touch, with an easy-to-navigate list of classic cocktail spins, biodynamic, organic and natural wines and a couple of beers. Slagel says there are plans to add more options shortly — I’d love to see an expanded aperitif and digestif list to round out the vibe.

All in all, The Vandal is shaping up to be a part of Pittsburgh’s dining landscape that offers a terrific option if you’re looking for somewhere easygoing yet transportive, as well as a good choice for a little midweek pick-me-up with a crisp glass of wine and a snack such as oysters with apple granita and horseradish.

“It’s a maturity. It’s years of ideas and sometimes it takes that long to have everything come together,” Hilty says. “It’s still a work in progress. But we’re really moving the needle to where we want it to be.”