The ethnic makeup of Pittsburgh has always been a complex issue, its diversity of cultures colliding with deep hometown pride that can lead to marginalization. More specifically, Middle Eastern Americans and Arabs are an under-represented group in the city and are often excluded from discussions about diversity in the area.

Two Pittsburgh filmmakers use their own experiences to stimulate some of these conversations. Ahmed Ragheb and Lily Ekimian have given an immigrant view of the city in their new short film The Sailor, the focus of which is an Egyptian woman who lives in Pittsburgh.

With no characters on screen, the film uses poetic imagery and abstract observations and is described in a press release as a “cinematic postcard exploring the contradicting nature of the immigrant experience: lonely, frightening, and exhilarating at the same time.”

These feelings are fully realized in the short 10-minute runtime of the film, which seems to draw on the real life of Ragheb and Ekimian.

“It’s hard to say exactly what exactly my life and Lily’s left behind in the film, but we both know what it’s like to question our cultural identity,” says Ragheb, who was born in Cairo, Egypt, where he was and Ekimian met while attending school. “We both lived in Egypt and we both live in Pittsburgh, but obviously our experiences in the two places are very different. Perhaps our film exists in the space between these differences. ”

This gap is represented by the contradicting narrator. He speaks in sentences that all start with the same few sentences, including “The houses are here” or “The neighborhood I live in is”. The rest of each sentence conveys confusion and contradictions, expresses joy in its new surroundings, as well as deep loneliness.

“The film consists essentially of six sentences, spoken in Egyptian Arabic, that are shown as separate chapters,” says Ekimian. “Formulated in each chapter, our character reformulates his observations and statements until he finally becomes familiar with the structure and presentation of his sentence. With each reformulation, he reveals something new, something true about his situation and his feelings for himself and not only for his new home, but also for what he left behind. ”

This unique and dreamlike representation of Pittsburgh brings familiar places and objects in the city to new life.

“Visually, we tried to capture the city in fragments,” says Ekimian. “The Sailor’s Pittsburgh is empty; people are hidden from view, even our character. But even without people there are signs of life. “ 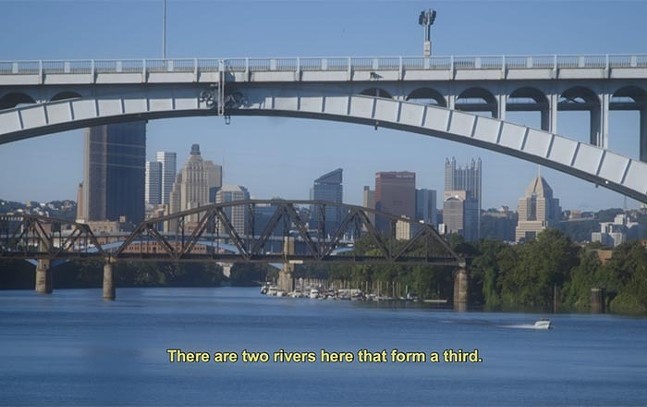 The short film fits in with the aforementioned themes of the duo’s work, which deals heavily with “the concepts of identity and place, with a special focus on feminism, cultural rejection and domestic relationships”.

The two filmmakers call the film a truly international production, with shooting in Pittsburgh, music production in Chicago, and translation and voice acting in Cairo. The poster even shows a detail of a painting by Ragheb’s grandfather, the Egyptian poster artist, painter and photographer Mohamed Ragheb.

The Sailor is the latest venture from Ragheb and Ekimian, who co-founded and directed The Pittsburgher, an online arts and culture magazine, and a film production platform called Dog Door Films. Previously, they produced and directed music videos for Daniel Knox and The Handsome Family, as well as a number of short films. They also completed their feature film debut, Portrait, which was defined as an experimental documentary.

While the Pittsburgh film scene has grown, largely thanks to in-depth, large-budget studio projects, it needs to better represent the diversity of voices, cultures, and experiences that make up the city, which Ragheb and Ekimian are doing with The Sailor.

“The fact that the film was accepted around the world was so encouraging because the ideas behind the film are universal,” says Ekimian. “Most people know what it is like to feel out of place, whether they are physically dislocated or not.”