Peraza’s new menu is based on heirloom varieties of corn imported from Mexico. “When you touch the core, when you crack it in half, when you feel the density, the dryness. What is the aroma? How does it interact with the water? What if you rinse it off the next day? How does it feel then? There’s so much going on when you start working with it, ”says Peraza.

Peraza was born in El Salvador and grew up in Southern California. He built a career in fine dining, mostly in California and Texas. In Pittsburgh, he worked as Executive Chef of Fl.2 at the Fairmont Hotel until last year. He left to start Cobra (Cantina owner Derek Burnell is also a co-owner of Cobra). Conversations with Burnell, who grew up in San Diego, sparked a discussion about what to do with the cantina kitchen. Both felt they had space in Pittsburgh to offer a menu based on Mexican and Mesoamerican foodways. “I’ve cooked with French technique my entire career, but never had the opportunity to get to grips with the roots of the food I grew up with,” says Peraza.

Peraza and his kitchen crew nixtamalize and grind the corn in-house, a process that enables a deeper expression of the aroma, taste, texture and nutrition of the grain. Right now it’s still a rarity in Pittsburgh to go through all of the steps required to process heirloom corn from core to plate. “A lot of people take the job for a beautiful tortilla for granted,” says Peraza.

Tlayuda starts with a crunchy but slightly pliable tortilla made from purple Oaxaca corn. It’s topped with black beans, Oaxaca cheese, cabbage, tomatoes, and avocado for a smoky, earthy bite. Peraza’s ropes are based on a fragrant bowl of white heirloom corn and are luxurious when topped with chicken tinga, black beans with duck fat, queso fresco, coriander, crema and avocado. And I loved Peraza’s Moloten, Cauliflower, and Plant-Based Chorizo, stuffed into a crispy achiote-infused masa bowl and served with guacamole, lettuce, salsa negra, and almond crema. They’re a top-notch starter, especially if you’re looking for something vegan (much of the menu is vegan-friendly, or can be made that way).

Perazas tacos are great, with fragrant corn tortillas from scratch that include items like sumptuous carnitas, hearty suadero, and savory salsas. If you’re looking for a bigger dish, I refer you to Perazas Pollo con Mole – its Mole Poblano is coated in earthy, bittersweet, spicy, nutty, and vegetable notes.

What Peraza is doing is an exciting development for Round Corner. It is a great addition to the already excellent bar program and atmosphere of Burnell, which opened in 2009. “We’re not trying to be the next pujol (Enrique Olvera’s groundbreaking restaurant in Mexico City) or anything like that. I’m just trying to maintain the integrity of dishes that have been made for generations, ”says Peraza. 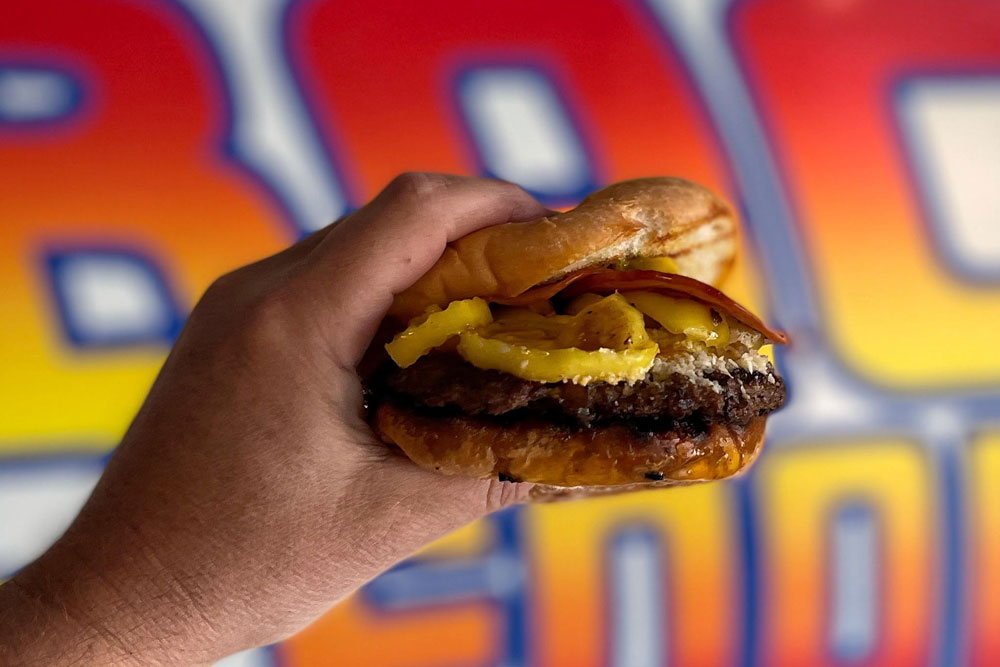 On the way: Back to the meal Opens on the south side
Back to the food, Eddie Barnz and Angel Randolph’s standout hamburger and winged wing shop, which comes with a side of nostalgia, is now open on the south side. It’s easy to spot – there’s a massive sign that says “Back To The Foodture,” an icon I hope is an early indication of the potentially bright future of the South Side Works (Back To The Foodture is an early tenant in what it promises to be a major revitalization of the entertainment and retail zone). It’s also an inviting gateway to the 900-square-foot space the couple has rehabilitated over the past few months. There’s a fair amount of indoor and outdoor seating (but be prepared to head to the nearby square if it’s crowded), and it’s decorated with pop culture elements, such as sets that stream vintage TV shows and fascinate Barnz .

I’ve been a huge fan of Randolph since I first ate their food in late 2019, and their opening menu at South Side Works remains essentially the same as in the now-closed Pitcairn original. There are 100+ types of wings and tons of hamburger builds, plus a couple of hot dogs and fries to top it off. Randolph added four new burgers to celebrate the launch of the new restaurant: Perky Herky, named after real estate agent and developer Herky Pollock; Bill The Thrill, in honor of Bill Flanagan, presenter and producer of our area’s business; PTL Burger as a nod to KDKA-TV’s Pittsburgh Today Live morning show; Hal-delious for … well, me. (Yes, it’s so heartwarming and just cool when someone names a menu item for you as you can imagine.)

There are many items to choose from, so it can be a bit overwhelming for beginners to navigate the menu. My advice is to follow your heart – Randolph has a knack for creating extraordinary flavor combinations. Some of my previous favorites are burgers like One More Chance and Buggy, as well as wings like Salt & Vinegar, Black Magic, Thai Basil, and Barnzy’s. I’m always on the lookout for something new (it helps if you bring a few friends so you can share a variety of items). On my first visit to the new place, I tried a Dusty Rhodes burger. The mix of provolone, crispy onion, bacon, Carolina-style barbecue sauce, and wing dust chips is an instant classic, and I loved the flavorful parmesan wings too. And this Hal Delious burger – the combination of mozzarella and parmesan cheese, Canadian bacon, pickled banana peppers and habanero sauce hit exactly the right notes when I say it myself about a burger with my name on it. 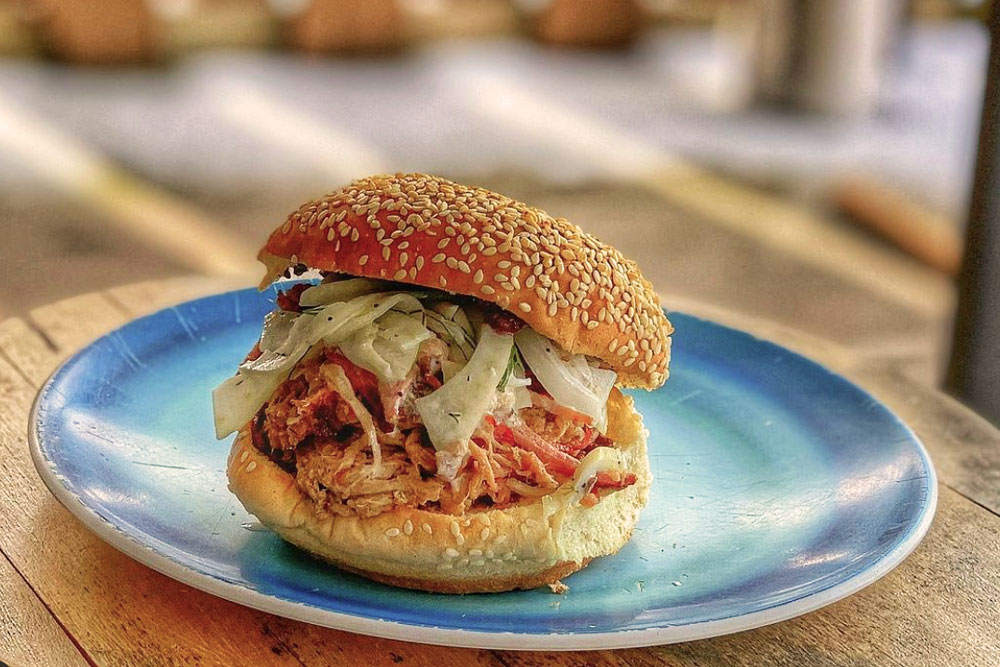 Next up: Stuntpig is set on roles
Back on a cold February afternoon, I ordered delivery from Stuntpig, Ariel Alexander and Cody Maze’s soon-to-be-market food truck. Eating a sandwich they call Mr. Pink – lovingly smoked pork shoulder, fennel and coriander coleslaw, and purple mustard in a sesame and potato bun – sparked dreams of summer fun. Stuntpig’s menu consists of sandwiches and aside from the buns, everything they can do, including smoking the meat, is made in-house. I’ve expected more from the two chefs since that first bite, after advancing on Instagram as they came up with recipes and popping up around town from time to time. First, I order The Costanza, a hat tip to New York City and “Seinfeld” with pastrami, melt, caraway seeds, coleslaw and purple mustard.

Your truck should start rolling regularly at the beginning of June. “We want to highlight the power of salt, acid and smoke. You’ll see that all over the menu, ”says Alexander.

Alexander grew up on a farm, helped start the butcher’s program at Marty’s Market, and later became the head chef of the grocery store’s on-site restaurant, cooked at Spak Bros., and worked as the butcher and cook at Whitfield. Maze was the longtime chef for Spak Bros. and worked in the kitchens of Cure, Salt of the Earth, and Casbah. The pandemic partially prompted the duo to start their own company.

Recently, Alexander and Maze partnered with some of their favorite businesses on Popups. A popup at Spak meant a joint effort of pizza and sandwich full of vegan options. Next up is a collaboration with Kelly’s Bar & Lounge on May 24th. Search for the duo to preview main menu options like Mr. Orange (smoked piri piri chicken, pickled cucumber, and chimichurri aioli), as well as site-specific dishes like brisket with Kelly’s famous mac’n cheese.

Then Alexander says: “We want to work. If we can be out there we will be as much as possible. Smoked sandwiches, nice side dishes and vegetables in the foreground. “