Waves appear on the surface of the Monongahela River in Marion County, West Virginia.

Far from the city lights that shimmer at its mouth in downtown Pittsburgh, the Monongahela River rises more than 200 miles south in one of the most remote areas of the Appalachians. Some of its tributaries come from forests so old and large that only the most intrepid hunters have seen them.

Given its sources, it is hardly surprising that the river has inspired more than its fair share of lore – including the lore of monsters.

Historian Glenn Lough once postulated that stories of monsters lurking in the Monongahela were first invented by indigenous peoples to drive Europeans from their camps and recycled by settlers to impress new residents.

They were later picked up by thousands of immigrants who arrived in the valley to work in mines and factories along the river in places like Fairmont and Morgantown.

In his 1969 Marion County story, “Now and Long ago,” Lough wrote about the lore of one such river monster, the Ogua, which he did not accept as fact.

“The Ogua … was altogether a mythical animal, first used by the Indians as a threat against all whites, then later by the whites, especially the Indian traders, soldiers and early visitors to the western wilderness, to impress the people back home – Easter people who were always anxious to believe every wild story about things, people and events that had to do with the land of deepest mysteries – the Monongahela Ohio land.

The story of the Ogua has never been completely silent and has since been supplemented by the story of Monongy and the recently “discovered” Riversville River Monster.

The story of the Ogua remains one of the most well-established and long-lived Monongahela legends. In a letter to his parents in Connecticut, Lough cited an account of the “unusual animal” described in the late 18th century by a youth stationed at Fort Harmer in what is now Marietta, Ohio. 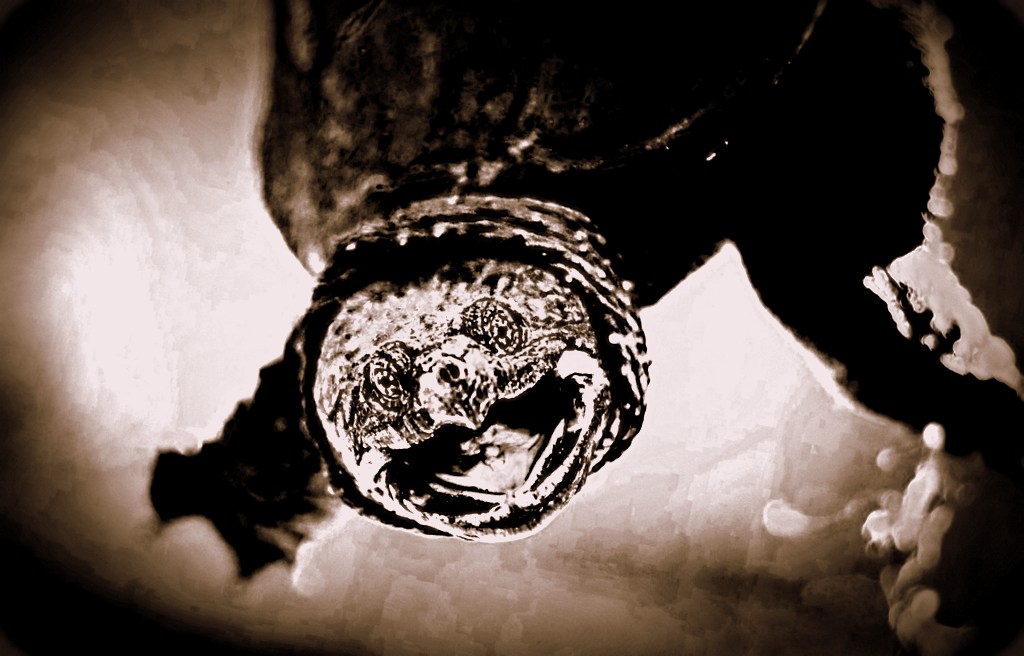 A photo illustration by Beth Betovsky from the Monongahela River matter.

The manuscript is on microfilm in the Draper Collection of the West Virginia University Library, series JJ., V. 2-4, according to Lough.

“There is one animal in this land that has aroused the admiration of everyone who has had the opportunity to see it. Being amphibious, it lives in the water during the day, but at night it comes to you in search of its prey on the land lie undetected in the wilderness behind an old tree stump until the deer passes over it without noticing its enemy.

“This creature grabs him immediately and catches him in his tail, which is five meters long, and, despite the deer’s efforts to break free, pulls him to the water, where he drowns and then devours.

“One of our men recently discovered an early morning with his prey, which he reported to some of the nearby company. They soon came up to him and killed him with clubs, but the deer was dead. It weighed 444 pounds.

“They live in a large, muddy bank where we can’t find a bottom. It has two turtle-like heads and is called an agua or agou by the Indians.”

According to some sources, the Monongy has been lurking in the river since the French and Indian War. It was postulated to be half human and half fish.

Bill Eggert of the Johnstown Tribune-Democrat in 2015 wrote in an article that chronicles skirmishes between British soldiers and “bizarre creatures from the river”. Native tribes named the creature Monongy after the river, he said.

“There was a spate of sightings of the Monongy in the early 1930s and through the late 1950s,” Eggart writes.

“Sightings were reported weekly and the Pittsburgh Police responded by setting up a task force specifically to deal with aquatic life.”

Eggart claims that in 2003 photos of Monongy taken from a fishing boat appeared online but were mysteriously removed. A “Search for Monongy” swim race was launched in Pittsburgh around 2010, and some who have since sought corroborative reports speculate that the story was entirely made up for the event and that no earlier legend existed.

In 1983 miner John Edward White was fishing for channel catfish on the Monongahela near Rivesville, downstream from Fairmont, when he watched a large fin and serpentine tail move through the water towards him.

Later that year, the Fairmont Times-West Virginian reported that other fishermen described the same type of monster near Rivesville, an hour and a half south of Pittsburgh.

Rachel Ellis, in her article, The Monsters of Marion County, published by the Marion County Convention and Visitors Bureau, wrote that “some gave a description that sounded like Ogua, including the reddish-brown color and razor-sharp teeth, while others gave this creature thought “. must be unique to Rivesville. ”

Her article also features a selection of other monsters some believe to haunt the hills of Marion County near Fairmont, where the West Fork River and Tygart Valley Rivers join to form the Monongahela. Ellis also provides links to several great restaurants and boat rentals along the way to help out with monster hunters.

An expert on monongahela lore, Les O’Dell, editor of West Virginia Cryptids and Strange Encounters, says the monongahela is an increasingly popular target for monster hunters.

“The area is known for its strange history – Bigfoot sightings, giant skeletons found in the 19th century, and even a strange plant-like creature aptly named Vegetable Man that was spotted in the woods near Rivesville in 1968” said O’Dell.

“So it is only fitting that the Monongahela River should harbor a creature like the Ogua. Who knows what might lie in its depths?”

Meet the five best monsters from the West Virginia hills